This is the 1956-57 season of the Western Canadian Intercollegiate Athletic Union. It was a competition for the Hardy Trophy. This was the first time four teams participated.

University of Manitoba cancelled its last four games because of bad ice and travel problems. It would have been very difficult for them to finish ahead of University of Alberta in any case. 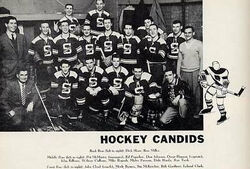 Retrieved from "https://icehockey.fandom.com/wiki/1956-57_WCIAU_Season?oldid=551796"
Community content is available under CC-BY-SA unless otherwise noted.