All the games were held in eastern Canada because of the expense of travelling across country and the travel time involved. Cross-country filghts were not that common yet.

Third game @ Montreal
Add a photo to this gallery 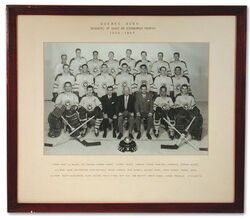 Retrieved from "https://icehockey.fandom.com/wiki/1956-57_Edinburgh_Trophy_Final?oldid=407503"
Community content is available under CC-BY-SA unless otherwise noted.