From the: Spokane, WA Spokesman-Review Wednesday, May 1, 1957

A crowd of 6,259 in storied Maple Leaf Gardens watched the Dunnies win it, 6-2. It was the play of left winger and Mormon elder Fred Etcher, whose shots sometimes seemed to have almost divine guidance, that insured the victory for the clean, hustling Ontario club.

Now the Dunlops are looking toward the world championship. There's little doubt that the Canadian Amateur Hockey Association will send them to Stockholm next February, although you never know about the CAHA. If the Dunlops can win there, they'll be the first to bring the world prize back to Canada since the Penticton V's did it in 1955. Since then, it has been Russia in the 1956 Winter Olympics, then Sweden, when Canada did not send a team to represent its national sport, in Moscow last winter.

No Less Than Fabulous Etcher's winning goal in tonight's deciding game, which came after 31 seconds of the third period for a 3-1 Whitby lead, was scored nothing less than fabulous fashion. It was set up by headgeared Charlie Burns, who plays with a silver plate in his skull from an ice concussion two seasons back, and who was worth his weight in gold in this series.

Burns, foxy and fearless in the corners, went to the wall against a Flyer defender and flipped a blind pass outward in front of the Spokane net. Etcher, floating in, overskated the puck. But he reached way behind him and using himself as a screen, ruddered the puck past Flyer goalie Johnny Sofiak, as he sailed pivoting through the crease.

If that was a fortunate turn of events, it was perhaps even less lucky than Whitby's first and second goals which got them a 2-1 lead in the second period after a scoreless first. Both of those shots were scrambled home by Bob Attersley, Whitby's leading scorer in regular season play, who hadn't scored against Spokane until tonight.

Two in 33 Seconds Attersley's first was a goal-mouth rebound. His second was a deflection of a pass-out from deep in the right hand corner. Both came in a space of 33 seconds, after John Zahara had put the Flyers into a 1-0 lead at 10:54 of the second, glancing Carl Cirullo's long drive into a top corner over "Long" John Henderson's guarding goal-stick.

But even after Etcher's 3-1 goal, the Flyers were conceding nothing. At 7:11 of the third, Trail tiger Bobby Kromm closed it to 3-2 when he tipped in Jack Lancien's low drive from the blue line. That made four series goals for little Bobby. No other Flyer had more than one in the games which saw the Dunnies win by 5-2, 6-3, 7-3 and tonight's 6-2. Borrowed from Trail for this series, and wearing the injured Lorne Nadeau's number 13, Kromm was brilliant all the way. As a Trail Smoke Eater, he's been used to boos when he took the ice against Spokane. He'll rate some Coliseum cheers next season.

Soon after Bobby's goal, Whitby's Sandy Air drew a minor penalty, and that of course sent Burns out to penalty-skate for the Dunnies. Burns was more than effective, because just eight seconds before Air returned, Harry Sinden stole a pass intended to start a Spokane powerplay rush, dumped it to Burns, and the little centre chipped the puck deftly over Sofiak's stick for a 4-2 lead.

Then it was preacher Etcher again, within 29 seconds, with a perfect high drive into the top right corner at 9:38 of the third. That made it all over, except the cheering for the Dunlops, which happened again as CAHA Secretary-Manager George S. Dudley presented the handsome Allan Cup itself.

That's an overstatement. The Flyers never quit trying to come back. They opened up and repeatedly looked dangerous until the final green light brought the big silver mug to centre ice. They they stayed out there and congratulated the Dunnies warmly. It was a clean series, and in the last three games the Flyers looked better--considerably better--than the final scores.

The Dunlops, you might have guessed, are co-sponsored by a tire and rubber company. That company virtually has promised to guarantee the new champions $40,000 for the Stockholm trip, if the CAHA gives the nod at its meeting May 25-26 in Edmonton. The Whitby manager, Wren Blair, is enthusiastic about the trip, and so are his players. Blair says he can count on three or four additions to make the club "real solid" next season.

They're plenty solid now, even though they played in senior "B" ranks last season, and were intermediates (hockey's equivalent of semi-pro baseball) the year before. Except for goalie Henderson and Burns, they came up with new stars each night.

Hodges Leads Spokes Tom Hodges, the spirited defenceman, was outstanding for the Flyers. It may be coincidence, but it was the hotblooded types like Hodges, Kromm, Buddy Bodman, Zahara, Dave Gordichuk and large Larry Plante (and for exceptions add Frank Kubasek and captain Ralph Luke) who were best for the Spokes in the series.

But they all gave all they had. They were more than 40 days on the road. They won the Savage Cup from the 1956 Allan Cup champion Vernon Canadians, and the Patton Cup for the Western Canada title from the former pro-packed Fort William Beavers, and now they're coming home.

They'll arrive in Spokane at 8:37 Thursday morning by air.

By golly, next season is less than five months away! 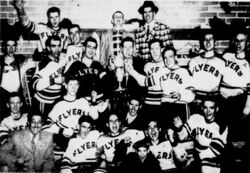 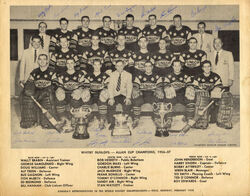 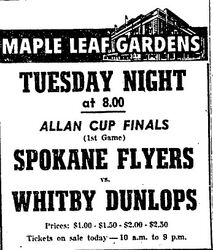