Start a Wiki
The 1956–57 Montreal Canadiens season was the club's 48th season of play. The Canadiens would place second in the league to qualify for the playoffs. The Canadiens defeated the Boston Bruins to win the Stanley Cup for the ninth time in team history and for the second year in a row.

The Canadiens qualified for the playoffs in second place. The Canadien then faced off against the New York Rangers, winning the best-of-seven series 4–1 to advance to the final against Boston.

For more details on this topic, see 1957 Stanley Cup Final. 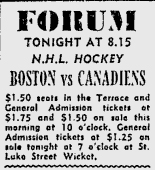 Retrieved from "https://icehockey.fandom.com/wiki/1956%E2%80%9357_Montreal_Canadiens_season?oldid=464566"
Community content is available under CC-BY-SA unless otherwise noted.