The 1956–57 Montreal Canadiens season was the club's 48th season of play. The Canadiens finished 2nd in the league and defeated the Boston Bruins 4 games to 1 in the 1957 Stanley Cup Finals to win the Stanley Cup for the ninth time in team history and second year in a row.

Montreal beat the Toronto Maple Leafs 2-1 at the Forum in Montreal on January 10 and moved into first place. The game was hard-fought and referee Frank Udvari found it necessary to rule with an iron hand that angered the fans. Fans thought he was being filthy, calling chippy penalties against the Habs and deliberately failing to call hooking and holding penalties by the Maple Leafs. The blow-up came in the last two minutes of the game. Maurice Richard received a high-sticking penalty. At 18:14, knowing his Maple Leafs were in danger, Toronto coach Howie Meeker pulled goaltender Ed Chadwick for six attackers. Dick Duff scored the tying goal, causing Richard, arguably the most popular and maybe the most outstanding player in Canadiens history, to go berserk and commence a heated argument with Udvari, and Richard banged his stick on the ice. He might have attacked Udvari if his teammates hadn't restrained him. Fans threw programmes, paper cups, hats and other debris and the game was held up. When it did resume, Bernie "Boom Boom" Geoffrion set up Don Marshall for the winning goal with a mere 6 seconds left to play. Although the fans were pleased with the outcome, an angry hum commenced as the players and officials left the ice. Udvari had to be escorted to his dressing room by police and ushers. A large part of the crowd now directed its attention to NHL President Clarence Campbell seated in his box seat and he became the target of jeers and threats. The situation began to show some of the aspects of the Richard Riot of two years previous when Richard had been suspended for an attack on an official. It was at least 30 minutes before Campbell was able to leave under police protection.

The Canadiens qualified for the playoffs in second place.

The teams last met in the 1955 Semi-finals where Montreal defeated Boston 4 games to 1. The Canadiens again won in five games with goalie Jacques Plante limiting the Bruins to 6 goals, 4 of which were scored by Fleming Mackell. Except for Game 1, Boston's line of Mackell, Jerry Toppazzini and Larry Regan held the Richards off the board but Montreal's second line of Jean Béliveau, Bernie Geoffrion and Bert Olmstead out played Boston's line of Don McKenney, Real Chevrefils and Leo Labine. The Canadiens also had depth scoring from their third and fourth lines while the Bruins had none.

Game 1 at the Montreal Forum saw the Canadiens out shoot the Bruins 39-23. After a scoreless first period, with Phil Goyette in the box for hooking, Boston's Fleming Mackell opened the scoring with a Power play goal. A pass from Doug Mohns at the point to Mackell at the side of the net saw him slip the puck past Plante. Maurice Richard then took over the game. A backhander from the slot and then a power play goal in which he was sent in on a breakaway by Doug Harvey staked Montreal to a 2-1 lead. A backhand shot from Bernie Geoffrion on the power play and a Maurice Richard wrister past Don Simmons on a drop pass from brother Henri Richard had Montreal leading 4-1 going into the third period. With less than two minutes to go in the game, Maurice smacked a shot in low on Simmon's stick side for a convincing 5-1 Montreal win.

Game 2 at Montreal was the closest match of the series. Shots were nearly even and despite seven power plays, no special team goals were scored. After a scoreless first period in which Vic Stasiuk and Doug Harvey engaged in some nasty spearing, Jean Béliveau scored the only goal of the game on a breakaway at 2:27 of the second period for a 1-0 Montreal win.

Game 4 at Boston saw the Bruins play their best game of the series. Although outshot 28-21, Don Simmons held Montreal off the scoresheet in recording his first career playoff shutout. Fleming Mackell opened the scoring on the power play 2:56 into the game, scoring from his favorite spot, beside the net. In the game's last minute, Mackell scored an empty netter past Maurice Richard who tried to stop Mackell's shot. Boston's 2-0 win set the series at 3 game to 1.

Game 5 at Montreal was a penalty-filled match as the desperate Bruins fought to avoid elimination. After five penalties, André Pronovost opened the scoring at 18:11 of the first period. As Don Marshall broke into the slot, he was taken out by two Bruins defenders causing Don Simmons lost sight of the puck and Pronovost tapped it in. A melee broke out a minute later with Leo Labine and Bert Olmstead the main combatants resulting in a Montreal power play to begin the second period. Dickie Moore broke around Bob Armstrong 14 seconds in and scored on Simmons. Armstrong crashed into Simmons on the play and was hurt, missing the remainder of the game. Later in the period, a low Geoffrion slap shot beat Simmons between the legs for his playoff leading 11th goal. The Bruins launched a furious assault in the third period in which Leo Labine scored on a Leo Boivin rebound, cutting the lead to 3-1. Don Marshall stopped the come back with a backhand goal with less than three minutes remaining. Floyd Curry scored a minute later to complete a 5-1 Montreal win. 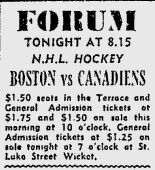 Highlights with English commentary of all goals in the 1957 Stanley Cup Finals and the Cup presentation.