Ice Hockey Wiki
Register
Don't have an account?
Sign In
Advertisement
in: National Hockey League seasons, 1955 in hockey, 1956 in hockey

The 1955-56 NHL season was the 39th season of the National Hockey League. Six teams each played 70 games. The Montreal Canadiens won the Stanley Cup as they beat the Detroit Red Wings four games to one in the best-of-seven final series.

At a governors meeting in December, a discussion took place concerning the uniforms worn by officials. It was contended that the present orange and black uniforms were confusing to players and fans, particularly when red uniforms are worn by either of the participating teams. Furthermore, it was pointed out that the existing uniforms showed up black on television. It was unanimously agreed that officials uniforms shoud be changed to black and white vertical stripes.

With Montreal frequently racking up two or three goals on any one power play, NHL President Clarence Campbell said he'd like the penalty rule revised to a penalized player returning to the ice when a power play goal is scored on a minor penalty. The Canadiens were the lone club to vote against the new legislation.

Boston Bruins GM Lynn Patrick made a huge trade in June 1955 in which veteran Ed Sandford, Real Chevrefils, Warren Godfrey and two others were sent to the Detroit Red Wings for Terry Sawchuk, Vic Stasiuk, Marcel Bonin and Lorne Davis. Sawchuk was the reigning Vezina Trophy winner and was seen as the solution to the lack of an elite Bruins goaltender since Frank Brimsek was traded in 1949. Stasiuk would immediately blossom in Boston and become a member of the famed "Uke Line" with John Bucyk and Bronco Horvath two years later. Patrick would re-acquire Chevrefils in 1956 and Sandford would retire in 1956. Only Godfrey played significant time for the Red Wings. The trade was a major coup for the Bruins and led to another big trade two years later.

The streak of seven straight seasons at the top of the NHL held by the Detroit Red Wings' dynasty came to an end as the Montreal Canadiens were tops. The Canadiens set a new record for wins in a season with 45. The Canadiens had a new coach, their one-time great former All-Star left-winger, Hector "Toe" Blake.

Dick Irvin, formerly the coach in Montreal, whom Habs' GM Frank Selke Sr. found a little truculent, took over as coach in Chicago, but could not get them out of the cellar, though they did improve. It was sort of a homecoming for Irvin as he started his coaching career with Chicago in 1930.

When the Chicago Black Hawks went to the Montreal Forum on October 22, Irvin was presented with a set of silver flatware by William Northey, representing the Canadian Arena Company. In the game itself, rookie Henri Richard scored two goals as Montreal shut out Chicago 6-0.

On November 5, Jean Beliveau scored three goals in 44 seconds as Montreal beat Boston 4-3. The record for fastest hat trick still was held by Bill Mosienko with three goals in 21 seconds.

On January 11, a crowd of 15,570 delighted fans at Madison Square Garden watched the Rangers trounce the Canadiens 6-1. Pete Conacher was a star for the Rangers with two goals. Lou Fontinato and Maurice Richard had a gala fight and Fontinato knocked out Richard with a punch that required several stitches above Richard's eye.

The Boston Bruins were without Terry Sawchuk for the January 14, 1956 in Montreal and planned to start John Henderson in the nets. However, Henderson had equipment problems leaving Boston without a goalie. Canadiens practice goalie Claude Pronovost (brother of Wings Marcel Pronovost) was loaned to the Bruins and he proceeded to shut his own team out, 2-0. Pronovost made 31 saves and also took a delay of game penalty.

Montreal routed the Rangers 9-4 on February 18 as Beliveau had a hat trick and Richard two goals. The Rocket was incensed when referee Louis Maschio gave his brother Henri Richard a misconduct penalty and his teammates had to cool him off.

Beliveau set a record for goals by a center when he scored his 45th goal on March 15. Maurice Richard was hurt in this game when he fell over Hawk defenceman Pierre Pilote's skate and went headlong into the goal. He required stitches and was taken to hospital for X-rays. The Rocket was back in the lineup on St. Patrick's Day as the Canadiens trounced the Rangers 7-2 and Richard had the hat trick.

The Bruins went into the last game of the season tied in points with the Toronto Maple Leafs for the last playoff spot. Both teams had an identical 23-33-13 record. The Leafs last game was against the second place Red Wings while the Bruins faced last placed Chicago. The Black Hawks were spoilers, beating the Bruins 3-2, while the Leafs shutout the Red Wings 2-0.

Rookie Glenn Hall had a fabulous year with 12 shutouts and a 2.11 goals against average for the powerful Detroit Red Wings. He received the Calder Memorial Trophy over Henri "Pocket Rocket" Richard.

In April 1956, the Bruins travelled across the island of Newfoundland, on an exhibition good-will tour playing in five arenas. Some Bruins played for the opposing team, including Terry Sawchuk playing goal for a team from Corner Brook. During the tour, the Bruins made hockey history by playing on an outdoor rink with artificial ice in the town of Bay Roberts on April 9, 1956. This would be just the second recorded outdoor game by an NHL team. [1]

The following is a list of players of note who played their first NHL game in 1955-56 (listed with their first team, asterisk(*) marks debut in playoffs):

The following is a list of players of note that played their last game in the NHL in 1955-56 (listed with their last team):

Jean Béliveau scores one of three goals on Terry Sawchuk in 44 seconds on the power play, November 5, 1955. 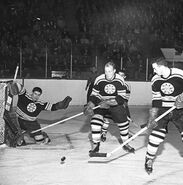 Over nine minutes of highlights beginning with a minute of the Rangers-Canadiens Semi-finals then goals of all five games of the 1956 Stanley Cup Finals.