The 1955–56 New York Rangers season was the 30th season for the team in the National Hockey League. The Rangers finished 3rd in the league and qualified for the Stanley Cup playoffs for the first time in five season. They lost in the Semi-finals to the Montreal Canadiens 4 games to 1. 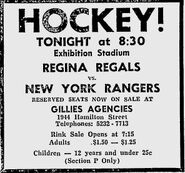 Over nine minutes of highlights beginning with a minute of the Rangers-Canadiens Semi-finals then goals of all five games of the 1956 Stanley Cup Finals.

Retrieved from "https://icehockey.fandom.com/wiki/1955%E2%80%9356_New_York_Rangers_season?oldid=690385"
Community content is available under CC-BY-SA unless otherwise noted.