Ice Hockey Wiki
Register
Don't have an account?
Sign In
Advertisement
in: National Hockey League seasons, 1954 in hockey, 1955 in hockey

The 1954-55 NHL season was the 38th season of the National Hockey League. Six teams each played 70 games. The Detroit Red Wings were the Stanley Cup winners as they beat the Montreal Canadiens four games to three in the best-of-seven final series.

Art Ross announced at the league governors meeting that his connection with Boston would terminate at the end of September. As this would be his last appearance at a league meeting, he took the opportunity to thank the governors and others associated with the league during the 30 years of his being officer of the Boston club for the kindness, courtesy and cooperation he had received, and extended his good wishes for the continued success of the league. Conn Smythe and Frank Selke voiced the good wishes of all present to Ross on his retirement.

Prior to the season, Red Wings head coach Tommy Ivan left Detroit to become general manager of the Chicago Black Hawks, and Jimmy Skinner replaced him behind the bench in the Motor City. One of the first things Ivan did at Chicago was to establish an extensive farm system, something the Black Hawks never had.

On November 3, although he was booed throughout most of the game, Eric Nesterenko of Toronto scored the tying goal to salvage a 1-1 tie with Detroit. The main feature of the game was the constant heckling of referee Red Storey by Red Wings assistant trainer Ross "Lefty" Wilson. Maple Leafs owner Conn Smythe demanded that Wilson be fined $1,000 by the league. NHL President Clarence Campbell disagreed, but told Wilson to cork it or face a heavy fine.

On November 11, the Detroit Red Wings were playing a home game against the Toronto Maple Leafs. Angry that Metro Prystai had been traded to the Chicago Black Hawks at the bequest of Leafs Conn Smythe in the name of league parity, the Wings were in a foul mood. Ted Lindsay fought with Leafs Jim Thomson and then coach King Clancy. The Leafs won 1-0 and as the Wings were leaving the ice, a hometown fan heckled Glen Skov. Skov, goalie Terry Sawchuk, Sid Abel and Lindsay scaled the wire mesh over the boards to get at the fan, with Lindsay punching the heckler in the eye.

With poor attendance at home and having played three home games in Indianapolis the previous season, the Chicago Black Hawks played six home games in St. Louis in 1954-55.

On December 2 at the Detroit Olympia, Montreal beat the Red Wings 4-1. Maurice "Rocket" Richard got his 398th goal and a misconduct penalty for an argument with referee Bill Chadwick. With two minutes left to play, a free-for-all broke out in front of the Detroit bench and both teams had to be sent to their dressing rooms to cool off. Detroit coach Jimmy Skinner exchanged punches with Butch Bouchard in the melee.

On December 18, Richard scored his 400th career goal against Chicago netminder Al Rollins in a 4-1 Canadiens victory over the Black Hawks.

Montreal and Toronto played to a 1-1 tie on December 29, at Maple Leaf Gardens. Rocket Richard got a standing ovation when he scored his 401st goal late in the first period. With five minutes left in the game, Bob Bailey gave Richard a heavy check near the boards, sending him to the ice. Richard went after Bailey and fists flew before officials restrained them. Richard tried to get a stick from a teammate but was restrained. He finally broke away from linesman George Hayes and struck the linesman with an empty glove. The fans laid a barrage of boos for Richard, whom they had cheered in the first period. Richard received a major penalty and two misconducts, while Bailey also received a major penalty and two misconducts. Ten days later, Richard was fined $250 for his attack on Hayes.

During a Montreal-Detroit clash on New Year's Day, NHL president Clarence Campbell went to the Detroit bench to warn Detroit coach Jimmy Skinner about his players using obscene language. Campbell was told to mind his own business, and that he was only a spectator. Campbell agreed that he was a spectator, but only had the league interest in mind.

On January 22, the Leafs defeated Detroit 3-1 at Maple Leaf Gardens when Ted Lindsay got into trouble. A spectator grabbed Gordie Howe's stick as he was skating by, and the fan and Howe scuffled briefly. As Howe skated away, the fan made a futile attempt to strike Howe. At that point Lindsay rushed over and struck the spectator with his stick. President Campbell took a dim view of this incident and suspended Lindsay for ten days (five games). Lindsay appealed the suspension, but the board of governors upheld Campbell's actions.

In a scoreless tie at the Montreal Forum on March 10, a new ice cleaner and resurfacer called a Zamboni was used for the first time. The fans were not appreciative of Toronto's defensive style in this game and threw garbage, including pig's feet, on the ice.

With three games left in the season, Rocket Richard, the famous 50-in-50 goal scorer, got into a stick-swinging fight with Hal Laycoe of Boston Bruins and then punched linesman Cliff Thompson, who was trying to restrain him. NHL President Clarence Campbell suspended the Rocket for the remaining three games of the season and the playoffs. At the time, the Canadiens held a two point lead over the Red Wings for first overall in the NHL and Richard held a two point lead over teammate Bernie Geoffrion for the NHL scoring lead. Geoffrion ended up passing Richard in total points and was awarded the Art Ross Trophy as the NHL leading scorer. Two days after the Campbell handed out the suspension, Richard attended a game at the Montreal Forum between the Canadiens and Red Wings. The Wings assumed a 4-1 lead,and then NHL president Clarence Campbell rubbed salt into the fans wounds when he showed up near the end of the first period. He was showered with pig's feet and other debris, and a fan punched him. One fan rubbed a tomato on his chest. Then a policeman, realizing the president's life was in danger, threw a tear gas bomb near the Canadiens goal during the intermission. A stampede for the exits commenced, and the fire director ordered the game called off for the safety of the public. The "Richard Riot" ensued that ended the game and carried over to the next day. The Red Wings won the game by forfeit and eventually went on to take first overall in the NHL for a record seventh straight season.

The following is a list of players of note who played their first NHL game in 1954-55 (listed with their first team, asterisk(*) marks debut in playoffs):

The following is a list of players of note that played their last game in the NHL in 1954-55 (listed with their last team): 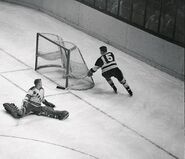 Game 5 of the 1955 Semi-finals would be Don Cherry's only NHL game.

A little over a minute worth of highlights of Semi-finals game 4 which the Red Wings won 3-0 to sweep the Maple Leafs. Goals by Vic Stasiuk and an empty netter by Tony Leswick are shown.