Ice Hockey Wiki
Register
Don't have an account?
Sign In
Advertisement
in: Montreal Canadiens seasons, 1954 in hockey, 1955 in hockey

The 1954–55 Montreal Canadiens season was the Canadiens' 46th season of play. The Canadiens finished in second place in the National Hockey League (NHL) with a record of 41 wins, 18 losses, and 11 ties for 93 points. In the playoffs, they defeated the Boston Bruins in five games in the Semi-finals before falling to the Detroit Red Wings in seven games in the Stanley Cup Finals.

This season was notable for the suspension of Maurice "Rocket" Richard, Montreal's star player, by NHL president Clarence Campbell after a vicious fight with Boston defenceman Hal Laycoe and Richard punching an on-ice official. The suspension sparked a riot by angry Canadiens fans on March 17, 1955, during a game against the Red Wings (see below).

On March 13, 1955, Canadiens star Maurice Richard was involved in an fighting incident in Boston. Boston's Hal Laycoe high-sticked Richard and cut him on the head, momentarily leaving Richard dazed and prone on the ice. Richard then got up off the ice and attacked Laycoe, breaking his stick on Laycoe. While linesman Cliff Thompson restrained Richard, Laycoe got up and punched Richard. Richard broke free and punched Thompson in the face. This was Richard's second incident with an official that season and a league disciplinary hearing was held. NHL president Clarence Campbell (who had previously been criticized publicly by Richard) then suspended Richard for the rest of the season and the playoffs; at the time, this was the longest suspension for an on-ice incident in NHL history. The Bruins' Laycoe received no fine or suspension for his actions. Public outrage from Montreal soon poured in, but Campbell stood firm, and moreover announced that he would be attending the Canadiens' next home game against the Red Wings on March 17.

Midway into the first period, Campbell arrived with his fiancée. Outraged Canadiens fans immediately began pelting them with eggs, vegetables, and various debris, with more being thrown at him each time the Red Wings scored, building up a 4-1 lead on Montreal. The continuous pelting of various objects stopped when a tear gas bomb was set off inside the Forum not far from where Campbell was sitting. The Forum was ordered evacuated and Campbell ruled the game forfeited to the Red Wings. That was the last straw, as a riot ensued outside the Forum, causing $500,000 in damage to the neighbourhood and the Forum itself. Hundreds of stores were looted and vandalized within a 15-block radius of the Forum. Twelve policemen and 25 civilians were injured. The riot continued well into the night, with police arresting people by the truckload. Local radio stations, which carried live coverage of the riot for over seven hours, had to be forced off the air. The riot was eventually over at 3 am, and left Montreal's Rue Ste-Catherine a mess.

Richard's suspension also cost him the Art Ross Trophy, the closest he ever came to winning it. When Richard's teammate Bernie Geoffrion passed him on the last day of the regular season, he was booed by Montreal faithful. Geoffrion, a right winger, was struggling to gain recognition of his considerable talents because the three leading right wingers of the 1950s were Gordie Howe of the Detroit Red Wings, Andy Bathgate of the New York Rangers, and Richard, Geoffrion's own teammate.

The Canadiens lost the Cup Final to Detroit in seven games, but would win the Cup in the year after, fittingly over the Red Wings and the next four years in a row after that. Richard retired in 1960 after the Canadiens' fifth straight Stanley Cup, a record that still stands.

‡ Forfeited to Detroit after one period. Goals and assists for the game still counted as official.

For more details on this topic, see 1955 Stanley Cup Final. 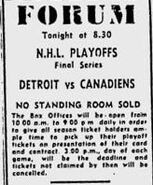 Over 10 minutes of highlights of the 1955 Stanley Cup Finals featuring all goals.