The 1954–55 AHL season was the 19th season of the American Hockey League. Six teams played 64 games each in the schedule. The "Carl Liscombe Trophy" for the league's top scorer is renamed to the John B. Sollenberger Trophy. The All-Star game is revived, with the AHL All-Stars taking on the defending champions Calder Cup champions from the previous season. The Pittsburgh Hornets finished first overall in the regular season, and won their second Calder Cup championship.

The second AHL All-Star game was played on October 27, 1954, after a 12 year hiatus. The defending Calder Cup champions Cleveland Barons lost 7-3 to the AHL All-Stars, in a game played at the Hershey Sports Arena, in Hershey, Pennsylvania. 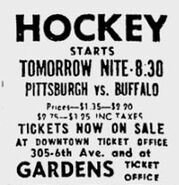