The 1953 Stanley Cup Final NHL championship series was contested by the Boston Bruins and the Montreal Canadiens. Boston was making its first appearance in the Final since the 1946 Final. The Canadiens, who were appearing in their third straight Final series, won the series four games to one. 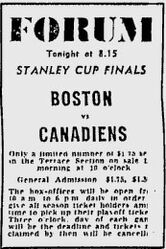 Narrated highlights of the 1953 Finals including all goals and the presentation of the Cup.