This year's Frozen Four marked the first time that Colorado College did not appear, though Michigan appeared for the sixth straight year. In the final game, The Wolverines won their third straight NCAA championship and fourth overall by defeating Minnesota, 7-3. 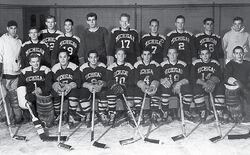