This is the 1953-54 season of the Quebec Junior Hockey League:

The Jonquiere Marquis were admitted as an expansion team.

The Montreal Junior Canadiens played their home games in the Montreal suburb of Verdun.

The Quebec Citadelles, after their dispute with the league last season, switched to the Ontario Hockey Association. A new team, the Quebec Frontenacs, was formed to take their place in the Quebec League.

The Citadelles did not do very well. Their travel expenses were very high and they were not as well connected politically as the Frontenacs. The Citadelles were owned by prominent members of the Liberal Party, which was the opposition in the provincial government while the Frontenacs were backed by the governing Union Nationale Party.

In January the Montreal Canadiens brokered a peace deal. The Frontenacs and the Citadelles were merged. The new team continued in the Quebec League and withdrew from the Ontario League. It would continue under the Frontenacs name.

As part of the deal a partial interlocking schedule was set up between the Quebec and Ontario Leagues. 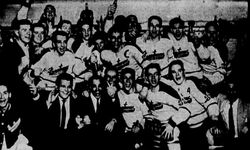 Montreal Junior Canadiens
Add a photo to this gallery 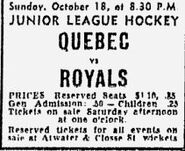 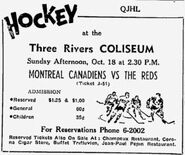 Trois Rivieres
Add a photo to this gallery

Final @ Quebec City
Add a photo to this gallery

Retrieved from "https://icehockey.fandom.com/wiki/1953-54_QJHL?oldid=466747"
Community content is available under CC-BY-SA unless otherwise noted.