Geraldton Gold Miners were again the successful team coming out of the NSHL to challange for the Intermediate A championship of Thunder Bay.

The Gold Miners travelled to Kenora to meet the Kenora Thistles in the final. The first game showed the effects of travel to Kenora from Geraldton and the Thistles won easily by a runaway 15-2 score although the end of the first period wa only a 4-1 count before the visitors legs gave out.

Game two was a turn around with Geraldton leading the home team 5-4 until the final minutes of the 3rd. and Kenora came through to win 6-5. Ray Rudiak of Geraldton had the hat trick for the visitors in the losing cause.

The series moved to Geraldton for the final games that Kenora won very easily and moved on to play Brandon in the weatern playoffs. 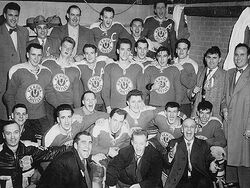 Kenora Thistles
Add a photo to this gallery

Retrieved from "https://icehockey.fandom.com/wiki/1952-53_Thunder_Bay_Intermediate_Playoffs?oldid=610555"
Community content is available under CC-BY-SA unless otherwise noted.