This is the 1952-53 Quebec Junior Hockey League season:

The St Jerome Aigles folded for financial reasons. They were competing against the St Jerome Alouettes in the Provincial Senior League.

The Montreal Nationale also folded because they could not compete against the Junior Canadiens.

The Granby Royals, who did very poorly at the gate, moved back to Montreal. The team did not fold because that would have reduced the league to three teams which was unacceptable.

Note: The league played an interlocking schedule with the Ontario Hockey Association Junior A League.

Note: At the end of the season the Canadian Amateur Hockey Association suspended the Quebec Amateur Hockey Association over the eligibility of junior player Ron Attwell. Since this meant that the Quebec teams would not be playing in the Memorial Cup playoffs, the league's playoffs were lengthened.The Canadiens-Royals series could not be lengthened because of the lack of playing dates in Montreal.

Note: In the third game the Canadiens scored a disputed goal in the last minute. Quebec coach Phil Watson protested very strongly and raised a ruckus. The Quebec Amateur Hockey Association (QAHA) insisted on a security deposit from him before the fourth game. He refused.

The Citadelles then pulled out of the QAHA and informed the Canadian Amateur Hockey Association (CAHA) that they would join the Memorial Cup playoffs. The CAHA agreed. The QAHA then suspended the Citadelles and awarded the league title to the Canadiens.

The Junior Canadiens went on a tour of the Maritimes during the Christmas break.

The Citadelles also went on a tour of the Maritimes. They went after they were accepted by the Canadian Amateur Hockey Association to enter the Memorial Cup playoffs. This tour was meant to get them into shape since there was a week's layoff after the aborted Quebec final series.

Claude Provost
Add a photo to this gallery 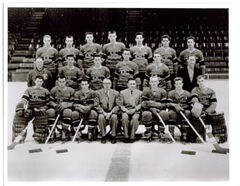 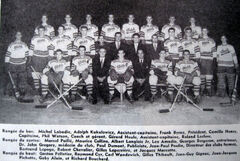 Quebec Citadelles
Add a photo to this gallery 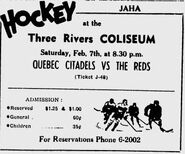 Exhibition @ Charlottetown
Add a photo to this gallery

Retrieved from "https://icehockey.fandom.com/wiki/1952-53_QJHL?oldid=459478"
Community content is available under CC-BY-SA unless otherwise noted.