This is the 1952-53 season of the Ontario Hockey Association's Junior A series:

Faced with the loss of one round of Memorial Cup playoffs, this league increased the length of several of its own series to compensate.

The March 7th game had to be suspended because of local rules that prohibited games on Sunday. It had to be called at midnight Saturday. This game was continued and completed on March 12th before the regularly scheduled game. 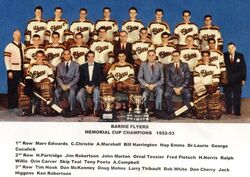 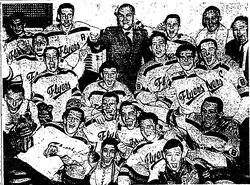 Barrie Flyers celebrate winning the final.
Add a photo to this gallery 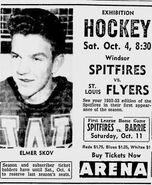 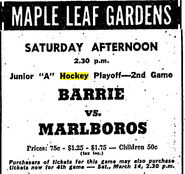 Retrieved from "https://icehockey.fandom.com/wiki/1952-53_OHA_Junior_A_Season?oldid=663077"
Community content is available under CC-BY-SA unless otherwise noted.