The 1952–53 Montreal Canadiens season was the Canadiens' 44th season of play. The Canadiens placed second in the regular season, defeated the Chicago Black Hawks in the Semi-finals and the Boston Bruins in the 1953 Stanley Cup Finals to win the club's seventh Stanley Cup championship.

On November 8, 14,562 fans were in attendance at the Montreal Forum when the Canadiens beat the Chicago Black Hawks 6-4. Elmer Lach scored his 200th career goal. Fifty seconds later, after Butch Bouchard fed him the puck, Rocket Richard rifled a puck past Al Rollins for his 325th goal, breaking Nels Stewart's unbeatable-record for career goals. "Old Poison" sent the following telegram: "Congratulations on breaking record. Hope you will hold it for many seasons. Best of luck to you and rest of team."

Butch Bouchard Night was held February 28 and he was presented with a car and a TV set. The Detroit Red Wings spoiled the night with a 4-3 victory. 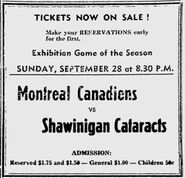 Highlights of the December 21, 1952 game between the Bruins and the Habs. This was the third game of a tryout for Jean Beliveau (who wears #12) and he scores twice in Montreal's 4-3 win. A first period fight between Jack McIntyre and Bernie Geoffrion (in response to McIntyre breaking Billy Reay's cheek), a dust-up between Milt Schmidt and Maurice Richard as well as goals by Dave Creighton and Beliveau are shown. The end has highlights of the December 7, 1952 Toronto Maple Leafs versus Chicago Blackhawks game including a goal by George Armstrong.

A fascinating video of hockey at all levels in 1953 featuring Jean Béliveau playing for the Quebec Aces and at the 6:45 mark, three minutes of excellent footage of the January 17, 1953 Canadiens-Red Wings game. Gordie Howe's game tying goal at 18:53 of the third period is shown.