The 1951 Stanley Cup Final NHL championship series was contested by the Toronto Maple Leafs and the Montreal Canadiens. The Maple Leafs won the series 4–1. It was the Toronto franchise's ninth Stanley Cup win and the last in a series of six wins starting in 1942. It was the first appearance in a string of ten consecutive appearances by the Canadiens.

Every game went into overtime in this series. Canadiens forward Bob Dawes played his only game of the 1951 playoffs in the last game of the Finals. He suffered a compound fracture of the right leg and never played in the NHL again.

Bill Barilko scored the Cup-winning goal, his last goal in the NHL as he would die in a plane crash during the summer. 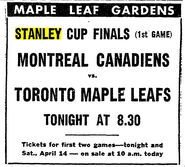 Highlights of Game 5 of the Finals including goals by Richard, the game tying goal with 32 seconds left by Tod Sloan and the overtime winner by Bill Barilko.