This is the 1951-52 season of the Provincial Senior League which played in Quebec.

The league added an American team this year - the Lake Placid Roamers. However the team could not get players of senior calibre, and dropped out on November 27, 1951. Their record (which was erased) was no wins and eight losses, with 12 goals scored and 79 against.

Lake Placid dropped out on November 27. The team had trouble getting players. Their record was erased, 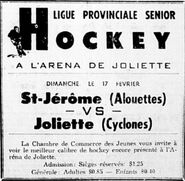 St Jerome
Add a photo to this gallery

Retrieved from "https://icehockey.fandom.com/wiki/1951-52_PSHL?oldid=608929"
Community content is available under CC-BY-SA unless otherwise noted.