The 1951–52 Toronto Maple Leafs season was Toronto's 35th season in the NHL. The Maple Leafs finished 3rd in the league and lost in the Semi-finals to the Detroit Red Wings, four games to none.

On October 13, 1951, the Leafs played an afternoon pre-season versus the Chicago Blackhawks which was attended by her Highness, Princess Elizabeth and Prince Philip. The Princess asked Conn Smythe many questions about hockey while the Prince enjoyed the bodychecking. No goals were scored before the royal couple had to depart. The Leafs then played their home opener that evening against the Hawks but not before unfurling their Stanley Cup banner. 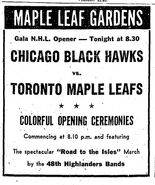 Retrieved from "https://icehockey.fandom.com/wiki/1951%E2%80%9352_Toronto_Maple_Leafs_season?oldid=688149"
Community content is available under CC-BY-SA unless otherwise noted.