The 17th Ice Hockey World Championships and 28th European Hockey Championships were held from 13 to 22 March 1950 in London, England. In a format similar to the 1949 championships, in the initial round, the nine teams participating were divided into three groups with three teams each. In the second round, the top two teams in each group advanced to the medal pool (for positions 1 through 6) with the remaining three teams advancing to the consolation pool for places 7 through 9. Canada won its 13th World Championship and Switzerland won its fourth European Championship. Both teams benefited from the absence of the defending champion, Czechoslovakia. 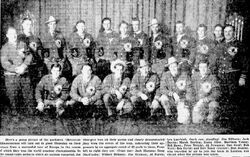 Information based upon German version at http://de.wikipedia.org/wiki/Eishockey-Weltmeisterschaft_1950