This is the 1950-51 Quebec Junior Hockey League season:

The league all-stars beat the defending champion Montreal Junior Canadiens 5-2 on October 1 in the first league all-star game. The game was played at the Montreal Forum. Bernie Geoffrion was the star of the game, with tow goals and an assist.

Jean Beliveau of the Quebec Citadelles and Fred Burchell of the Montreal Nationale tied for the scoring lead with 124 points each. Beliveau had 61 goals and 63 assists while Burchell had 49 goals and 75 assists.

Bernie Geoffrion of the Nationale finished third with 54 goals and 44 assists for 98 points. 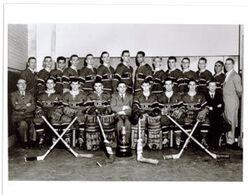 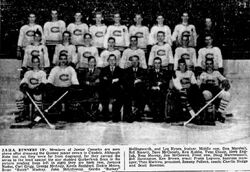 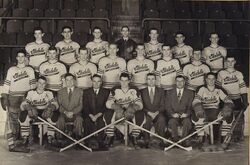 Quebec Citadelles' Jean Beliveau is presented with a new car during a night for him in April.

Junior Canadiens @ Regina on Jan. 3, part of an exhibition tour.