Ice Hockey Wiki
Register
Don't have an account?
Sign In
Advertisement
in: Olympic Games, 1948 in hockey, World Championships in Switzerland

In Ice hockey at the 1948 Winter Olympics, Team Canada returned to its dominance, winning their fourth Gold Medal out of the first five Olympic Games.

Canada was represented by the RCAF Flyers.

The tournament was marred by controversy before the Games began. The United States sent two hockey teams to compete in St. Moritz, which nearly caused the cancellation of the entire tournament. At the center of the issue was amateurism. One team was sponsored by the Amateur Athletic Union (AAU) and the United States Olympic Committee (USOC). The USOC was responsible for determining American participation in the Games. The other team was sponsored by the United States Amateur Hockey Association (USAHA) and the Ligue Internationale de Hockey sur Glace (LIHG). The LIHG was responsible for approving the participation of national hockey teams at the Olympics. The USAHA openly allowed professional players on their teams, and the team sent to St. Moritz was comprised of professionals, whereas the AAU team was strictly made up of amateurs. No resolution was reached before the Games and both teams arrived at St. Moritz ready to play. This created a tense showdown between the USOC's president, Avery Brundage, the LIHG, the Swiss organizing committee and the International Olympic Committee (IOC). The IOC was responsible for the overall running of the Games. The IOC initially ruled that neither team could compete. This incensed the LIHG, who threatened to boycott the Olympics, effectively ending the hockey tournament. The Swiss organizing committee, fearing this eventuality, ignored the IOC's ruling and allowed the AHA team to play in the tournament and the AAU team to march in the opening ceremony. Eventually the parties agreed to allow the USAHA team to play but the results of their games would not count, and they would not be eligible to win a medal. 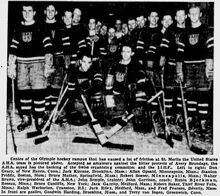 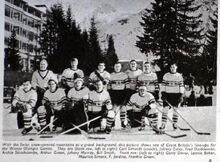