These are the 1948-49 Saskatchewan Junior Playoffs:

There were two full leagues and part of another playing Junior hockey in Saskatchewan in the 1948-49 season.

The original Western Canada Junior Hockey League had the Regina Pats and the Moose Jaw Canucks as well as four Alberta-based teams. There were also the Saskatchewan League and the Soo Line League.

Note: Weyburn Jaycees were a juvenile team and did not participate in the league playoffs. 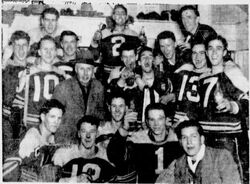 Moose Jaw Canucks
Add a photo to this gallery

North Semi Final @ Saskatoon
Add a photo to this gallery

Retrieved from "https://icehockey.fandom.com/wiki/1948-49_SJHL_Season?oldid=458968"
Community content is available under CC-BY-SA unless otherwise noted.