The 1948–49 Toronto Maple Leafs season was Toronto's 32nd season in the NHL. The Maple Leafs finished 4th in the league and won the 1949 Stanley Cup Finals over the Detroit Red Wings by 4 games to 0.

A league record of ten major penalties was set November 25, 1948 when 11,000 fans at the Montreal Forum witnessed a donnybrook. It started when the Habs' Ken Mosdell elbowed Maple Leaf Gus Mortson. Mortson retaliated by knocking Elliot de Grey down with his stick. Montreal's Maurice Richard then sprang onto Mortson's back, they fought and then all hands joined in. Mortson, Richard, Toronto's Howie Meeker and Mosdell were assessed major penalties. Play had scarcely resumed when the Habs Ken Reardon and the Leafs Joe Klukay began fencing. Bill Barilko went at Reardon, while Klukay got into it with Billy Reay, and in another fight, Hal Laycoe got into it with Garth Boesch. Turk Broda quietly picked up his first shutout of the year as the Leafs beat the Canadiens 2-0. 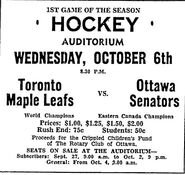 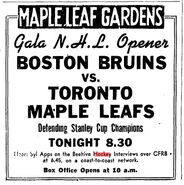 Sid Smith scores one of his three goals on Harry Lumley during Game 2 of the Finals, April 10, 1949.

Clarence Campbell presents the Cup to Ted Kennedy, April 16, 1949.
Add a photo to this gallery

Highlights of Game 4 of the 1949 Stanley Cup Finals in which the Leafs win the Cup with a 3-1 victory. Goals by Ray Timgren and Max Bentley are shown.

Toronto Ice Hockey Match, 1949
Add a photo to this gallery

Retrieved from "https://icehockey.fandom.com/wiki/1948–49_Toronto_Maple_Leafs_season?oldid=726942"
Community content is available under CC-BY-SA unless otherwise noted.