The 1948–49 New York Rangers season was the 23rd season for the team in the National Hockey League (NHL). The Rangers finished last in the league and did not qualify for the playoffs.

On October 8, 1948, the New York Rangers were due to start their season against the Montreal Canadiens, when the team suffered a bad misfortune. Buddy O'Connor, Frank Eddolls, Edgar Laprade, Bill Moe and Tony Leswick were travelling by car from Montreal to Saranac Lake, when it was struck by a truck near Rouse's Point, New York. O'Connor suffered several broken ribs, Eddolls suffered a severed tendon in his knee, Laprade suffered a broken nose, Moe had a cut on the head requiring stitches and Leswick escaped with only a few bruises. This had a major impact on the Rangers season as they only scored 133 goals and finished last. 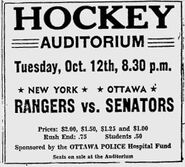 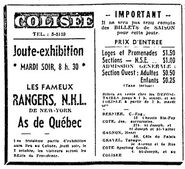 Shawinigan
Add a photo to this gallery

Retrieved from "https://icehockey.fandom.com/wiki/1948–49_New_York_Rangers_season?oldid=713637"
Community content is available under CC-BY-SA unless otherwise noted.