The 1948–49 Boston Bruins season was the Bruins' 25th season in the NHL. The Bruins finished 2nd in the league and lost to the Toronto Maple Leafs four games to one in the Stanley Cup Semi-finals.

To celebrate their 25th year in the NHL, the Bruins retired the "number" jerseys they'd worn since 1936 for a white jersey with the "spoked B" logo for the first time. On the horizontal spokes to the left and right of the "B" was "24" and "49", marking the year the Bruins entered the NHL and the 25th anniversary year. Also introduced was a black jersey with a gold block "B". The Bruins had worn jerseys with a brown and then black "B" from 1932-36. Although Milt Schmidt wore the "C" and Jack Crawford an "A", Crawford was designated the team captain with Murray Henderson wearing the other "A."

The 2nd National Hockey League All-Star Game was held at Chicago on November 3, 1948. Bruins Milt Schmidt, Woody Dumart and Frank Brimsek played for the All-Stars against the Toronto Maple Leafs. The All-Stars won 3-1 with Dumart scoring the winning goal. Brimsek, wearing number 0, recorded the win. The November 10, 1948 game versus the Detroit Red Wings was postponed to the following night due to fog in the Boston Garden caused by a heat wave.

With Milt Schmidt missing 16 games, still ailing from a knee injury sustained the previous season, several Bruins playing in their first full season for the team ably stepped up. Paul Ronty put up 49 points to lead the team and finish 5th in league scoring. Johnny Peirson and Grant Warwick netted 22 goals, both top 10 in the league while Ronty and Kenny Smith scored 20 and Pete Babando 19. By the end of November, the Bruins had a 10-2-3 record.

Tragedy struck Bruins star goalie Frank Brimsek in January 1949 when his young son became gravely ill. Les Colvin played his only NHL game filling in for Brimsek during a 4-2 loss to the Montreal Canadiens on January 22, 1949. Gord Henry was recalled from the Hershey Bears for his first NHL game and recorded a shutout in a 3-0 win over Montreal on January 23. The Bruins then signed Jack Gelineau to man the nets after Brimsek's son dies. Gelineau was attending law school at McGill University in Montreal and continued his studies. Gelineau played 4 games, went 2-2 and would become the Bruins starting goalie in 1949-50 and win the Calder Memorial Trophy. Brimsek returned for the February 6, 1949 game versus the Toronto Maple Leafs.

The Bruins called up Dave Creighton and Zellio Toppazzini for the February 12, 1949 games versus the New York Rangers. Both would score in their NHL debuts. Creighton would become a full-time player for the Bruins in 1949-50 and have a ten year NHL career. Zellio never became an NHL regular but his younger brother Jerry Toppazzini would have a very successful career and play a dozen seasons, mostly with the Bruins.

Game 2 in Toronto was a closer match with the Leafs Ray Timgren scoring on the power play at 3:36 of the first with the Bruins Pat Egan again in the box. Woody Dumart scored a Shorthanded goal on the same Leafs PP to even the score. Late in the second period, the Bruins Paul Ronty scored his first playoff goal to put the Bruins up 2-1. Harry Watson was once again the hero, scoring twice in the third period to win it 3-2 for the Leafs.

Game 5 in Toronto again saw the Leafs score first when Cal Gardner scored on the PP. Playing without Crawford, Peters and Schmidt, the Bruins Grant Warwick tied it up, also on the PP, until Ray Timgren's trickler made it past Frank Brimsek to put the Leafs up 2-1 at the end of the first period. Six minor penalties were called in the second period but Max Bentley's second of the series was the only goal, putting the Leafs up 3-1. Desperate, the Bruins poured it on in the third but when Fern Flaman was called for boarding at 9:29, the fans littered the ice, causing a 15 minute delay before play started again. Johnny Peirson made it close with less than a minute left but the Leafs held on for a 3-2 win to take the series in 5 games.

The Bruins did not receive any awards this season. 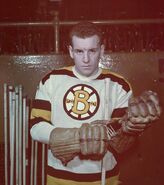 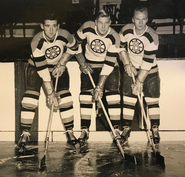 Ray Timgren scores in Game 5 of the 1949 Semi-finals.
Add a photo to this gallery

Retrieved from "https://icehockey.fandom.com/wiki/1948%E2%80%9349_Boston_Bruins_season?oldid=673470"
Community content is available under CC-BY-SA unless otherwise noted.