It was the first World Championship to use the recently-adopted centre red line.

The Canadian Amateur Hockey Association (CAHA) had asked the Calgary Stampeders and the Hamilton Tigers, Allan Cup finalists in the previous year, and the Winnipeg Monarchs and St. Michaels College Majors, Memorial Cup finalists in the previous year, to represent Canada. All four teams turned down the invitation because their leagues' play would suffer during their long absence.

In December the CAHA asked the junior Edmonton Canadians, who had won the Alberta junior hockey title in 1945-46 to make the trip to the World Championship. This would have marked the first time that a junior team would represent Canada. The Canadians and their league, the Edmonton City Junior League agreed.

However, the British Ice Hockey Association, under Bunny Ahearne, refused to guarantee the team's expenses although they did agree to book a tour of Europe for the Canadians.

THe CAHA did not consider this acceptable and pulled out of the championsip. 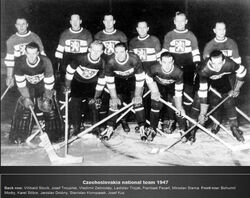 Information based on German version at http://de.wikipedia.org/wiki/Eishockey-Weltmeisterschaft_1947