This is the 1947-48 season of the Junior Amateur Hockey Association:

For the first time since 1944-45, the JAHA admitted teams from outside the Montreal area. Teams from Trois Rivieres, Granby, Quebec City, and Valleyfield were admitted. They all had to guarantee visting teams $75.00 per game from the gate receipts.

Sherbrooke was also admitted but the city did not enter a team. It was felt that there would have been too much competition from the Sherbrooke St Francois team in the Provincial Senior League.

Note: The Granby team, known as the Granby Hockey Club, dropped out on November 23, 1947. It had already lost $1200.00. The Verdun team in the Provincial Senior League was transferring to Granby which would have been too much competition for the juniors. 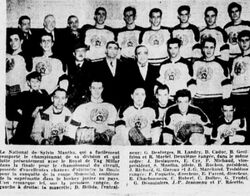 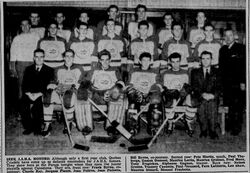