Ice Hockey Wiki
Register
Don't have an account?
Sign In
Advertisement
in: Montreal Canadiens seasons, 1947 in hockey, 1948 in hockey

The 1947–48 Montreal Canadiens season was the 39th season in club history. The Canadiens finished 5th in the league and did not qualify for the playoffs.

Bill Durnan was the last goaltender to serve as captain of an NHL team. He suffered his only losing season during the 1947-48 season, and, for the only time in his career, did not lead the league in goals against average. [1] 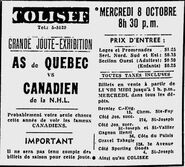