The 1947–48 Detroit Red Wings season was the Red Wings' 22nd season. The Red Wings finished 2nd in the league and lost to the Toronto Maple Leafs in the 1948 Stanley Cup Finals 4 games to 0. 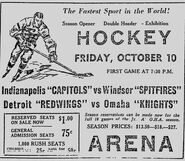 Pre-season @ Windsor
Add a photo to this gallery

Retrieved from "https://icehockey.fandom.com/wiki/1947–48_Detroit_Red_Wings_season?oldid=714340"
Community content is available under CC-BY-SA unless otherwise noted.