The injury riddled Kimberley Dynamiters lost out to Calgary's Stampeders in the Western Canada semi-final series, but not before they put up a gallant battle, and the Stampeders knew they had to go at their best lick to defeat the boys from B.C.

The 1946-47 Dynamiters may have not been the best team to ever wear a Dynamiter uniform, but one can say they were not the most "courageous." It had been a rewarding season for the Dynamiters coach, Ralph Redding, to see his boys put up such an outstanding performance against one of the most powerful teams to ever represent Calgary.

Ralph Redding has given more to the sport of hockey in Kimberley than any other individual, both as a player and a coach. He has coached more Dynamiter teams than anyone else, and was a real credit to the sport--both on the ice and off. 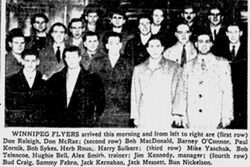 Winnipeg Reo Flyers
Add a photo to this gallery

Final @ Winnipeg
Add a photo to this gallery

Retrieved from "https://icehockey.fandom.com/wiki/1946-47_Western_Canada_Allan_Cup_Playoffs?oldid=439509"
Community content is available under CC-BY-SA unless otherwise noted.