Ice Hockey Wiki
Register
Don't have an account?
Sign In
Advertisement
in: National Hockey League seasons, 1946 in hockey, 1947 in hockey

The 1946-47 NHL season was the 30th season of the National Hockey League. Six teams each played 60 games.

The schedule was increased from 50 to 60 games. New rules allowed goaltenders to play with a broken stick or play with one from a teammate.

For this one season, the Rangers introduced a new uniform in which the jersey number was on both the front and back with "RANGERS" arched above the number on the jersey front.

Tommy Gorman, who had been associated with the National Hockey League since its inception in 1917, announced his retirement in July of 1946 as general manager of the Montreal Canadiens. He left behind him seven Stanley Cup champions and a hall of fame career as a coach and general manager. Frank Selke, released from the Toronto Maple Leafs, took over as general manager and would build the greatest dynasty hockey ever knew in the late 1950s. The Canadiens were in financial trouble at this time, despite their winning team and Selke would turn things around by buying up talent and keeping the cream of the crop, selling some players to teams that needed talent.

Red Dutton finally got to resign as president of the NHL, as Clarence Campbell, whom Frank Calder had been grooming as his successor, had come home from Europe. Campbell's experience in law and hockey made him the perfect choice as president.

Lorne Chabot, whose outstanding career as goalkeeper brought him two Stanley Cups, a Vezina Trophy and a First All-Star Team selection, died October 10th, five days after his 46th birthday. He had been suffering from kidney disease for some time and had been bedridden with severe arthritis.

Detroit lost Syd Howe through retirement, but another Howe started his great career as Gordie Howe was Detroit's new rookie. In one of his first fights, he took care of Montreal's Rocket Richard. Sid Abel then added a taunt that enraged Richard and he broke Abel's nose in three places.

Chicago decided to purchase goaltender Paul Bibeault from Montreal and regretted it. He played badly, one of his losses being an 11-0 whitewashing at the hands of Toronto. Finally, president and general manager Bill Tobin had enough and brought up 20 year old Emile Francis to replace him. He made his debut on February 9th, 1947 in a 6-4 win over Boston.

During the February 1, 1947 Rangers-Canadiens game, Chuck Rayner skated three times into Montreal's zone in an attempt to score in the Rangers 2-1 loss.[1]

A donnybrook took place March 16th, 1947 between the New York Rangers and Montreal Canadiens. Cal Gardner lifted Kenny Reardon's stick so that it clipped him in the mouth and a fight broke out between both teams and the fans. On that same night, Billy Taylor of Detroit set an NHL record with 7 assists in a 10-6 shootout win over the Chicago Black Hawks.

Bill Durnan broke George Hainsworth's record of consecutive Vezina Trophies as he won his fourth in a row, and Montreal again finished first.

Max Bentley edged out Rocket Richard by one point and won the scoring championship.

The following is a list of players of note who played their first NHL game in 1946-47 (listed with their first team, asterisk(*) marks debut in playoffs):

The following is a list of players of note that played their last game in the NHL in 1946-47 (listed with their last team): 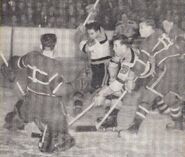