The 1946–47 Toronto Maple Leafs season was Toronto's 30th season in the NHL. The Maple Leafs finished second in the league and won the 1947 Stanley Cup Finals over the Montreal Canadiens by four games to two.

During the season, Maple Leaf Gardens was the first arena in the NHL to have Plexiglas installed in the end zones of the rink.[1]

†Joe Klukay name was removed by mistake from new version of 1947 Toronto's engraving created in 1957–58. There is more than enough room to add his name. He played in finals and qualified to be on the Cup.

When the Replica Cup was created in 1992–93 a new mistake happened. Robert J. Galloway's name was misspelled as P.J. Galloway with "P" instead of a "R". His name was spelled correctly the first two times 1947 Toronto members were engraved. 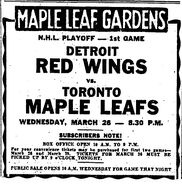 Retrieved from "https://icehockey.fandom.com/wiki/1946%E2%80%9347_Toronto_Maple_Leafs_season?oldid=688131"
Community content is available under CC-BY-SA unless otherwise noted.