The 1946–47 Boston Bruins season was the Bruins' 23nd season in the NHL. The Kraut Line of Milt Schmidt, Bobby Bauer and Woody Dumart continued with their scoring prowess and all three finished in the top 10 league scorers and made the All-Star team. The Bruins finished 3rd in the league and lost in the Semi-finals to the Montreal Canadiens 4 games to 1.

Herb Cain was demoted to the Hershey Bears, never to play in the NHL again. Cain was the NHL Scoring Leader in the 1943–44 Boston Bruins season, with a record (since surpassed) 82 points and finished second to Maurice Richard in goal scoring during the 1944-45 season. Cain's production declined in the 1945-46 season and he was reputedly demoted due to a contract dispute with Art Ross. Cain is the only NHL scoring leader that has not been inducted into the Hockey Hall of Fame.

This was the first year that the team captain and assistants were identified with a letter on their jersey. Bobby Bauer wore the "C" and defensemen Jack Crawford and Murray Henderson the "A." For some reason, the Boston Bruins official position is that Crawford was the team captain. However, there are no photos nor NHL game sheets in which he is designated as such while there are several photos of Bauer with the "C", such as the team picture.

The Bruins enjoyed line-up stability and relatively few injuries. Goal scoring rose across the league from the previous season with the Kraut Line leading the team and acquisition Joe Carveth chipping in 21 goals. Milt Schmidt finished 4th in league scoring, made the First All-Star Team and was runner-up for the Hart Memorial Trophy. Woody Dumart and Bobby Bauer (with 30 goals and only 4 penalty minutes) both made the Second Team and Bauer won the Lady Byng Memorial Trophy. The defense was solid and joined by 19 year old Fern Flaman for 23 games, the first of a dozen seasons he'd play for the Bruins. Frank Brimsek continued his brilliant play and was voted a Second Team All-Star.

Johnny Peirson had a 5 game tryout beginning on January 4, 1947 while the Bruins shopped Bill Shill, who would be sold. After gaining experience in the minors for a year, Peirson would join the Bruins for good and play nine seasons for them. The third line was overhauled for the January 15, 1947 game against the Chicago Black Hawks with Eddie Barry, Jack McGill and Mark Marquess being called up to the team. Marquess would have an immediate impact, scoring twice in his debut, but this would be his only NHL season. Also in this game, Fern Flaman filled in for Babe Pratt and would play 23 games before becoming a regular the next season.

Dit Clapper had retired from playing the year before to coach full-time but due to an injury to Jack Crawford, was called back into service on November 24, 1946 for 3 games and later on December 11, 1946 for 2 games when Babe Pratt was hurt. He also played two games in January 1947. He was the first player in NHL history to play 20 seasons in the league. Before the February 12, 1947 game versus the New York Rangers, Clapper was inducted into the Hockey Hall of Fame. He was the first active player to be inducted.[1] The Bruins celebrated with a 10-1 victory over the Rangers. Clapper's #5 jersey was retired before the March 1, 1947 game against the Montreal Canadiens.

Before the April 1, 1947 playoff game against Montreal, Eddie Shore was similarly honoured with entrance to the Hall of Fame and his #2 jersey was retired. Pat Egan, who had been wearing #2 up until April 1, donned #22 for the rest of the playoffs. 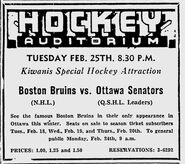