This is the final series for the 1845-46 United States National Championship and the Walter A Brown Trophy:

Note: Despite the fact that the Vancouver Canucks were baed in a Canadian city, they were eligible for the United States championship because the league they played in, the Pacific Coast Hockey League, was an American league.

All games were @ Vancouver

A challenge issued by the Vancouver Canucks to the Calgary Stampeders (Allan Cup champions) was refused. 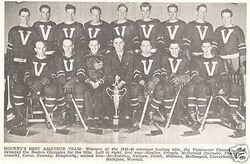 Vancouver Canucks
Add a photo to this gallery

Retrieved from "https://icehockey.fandom.com/wiki/1945-46_United_States_National_Senior_Championship?oldid=402472"
Community content is available under CC-BY-SA unless otherwise noted.