This is the 1945-46 season of the Northern Saskatchewan Junior Hockey League:

It was a part of the Saskatchewan Junior Hockey Legaue.

Road conditions prevented the University team from making it to Prince Albert for the fifth game. It was decided to concede the game and the series. 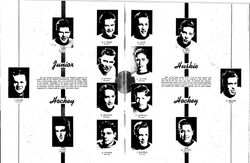 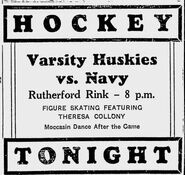 Saskatoon
Add a photo to this gallery
Retrieved from "https://icehockey.fandom.com/wiki/1945-46_NSJHL_Season?oldid=455414"
Community content is available under CC-BY-SA unless otherwise noted.