The 1945–46 Montreal Canadiens season was the Canadiens' 37th season of play. The Canadiens finished 1st in the league and defeated the Boston Bruins in the 1946 Stanley Cup Finals 4 games to 1 to win the Stanley Cup for the sixth time.

Having last met in the 1943 semi-finals where the Bruins defeated the Habs 4 games to 1, the 1946 series would see three games go to overtime. The Canadiens won two of the OT games and defeated the Bruins 4 games to 1. Brothers Terry Reardon (Boston) and Ken Reardon (Montreal) faced each other in the series.

Game 1 in Montreal saw a scoreless first period yield to an early second period Power play goal by Butch Bouchard of the Canadiens. Bob Fillion made it 2-0 before the Bruins scored a pair by Bep Guidolin and Woody Dumart. Tied going into the third, the Bruins Jack Crawford scored his only goal of the playoffs with less than 6 minutes left. An accurate pass from Maurice Richard to Murph Chamberlain tied the game with less than four minutes in the period, sending the game into overtime. The Bruins line of Kenny Smith, Bill Cowley and Terry Reardon had stopped the Habs "Punch Line" from scoring all game. In OT, Cowley had a breakaway that was stopped by Bill Durnan. At 9:08, Frank Brimsek kicked out a point shot by Butch Bouchard. Maurice Richard scored on the rebound, his 5th of the playoffs.

Game 2 in Montreal saw the Habs Toe Blake barely play, having hurt his back in Game 1. The teams traded first period goals by Pat Egan and Elmer Lach. As in game 1, the Bruins took the lead on a goal by Bobby Bauer in the second but the Habs again tied it up on Butch Bouchard's long point shot. Jimmy Peters was the OT hero as his backhand shot deflected off Terry Reardon and into the net. Montreal held a 2-0 series lead going to Boston.

Game 3 in Boston again saw Montreal pull the game out in the third period. After the Bruins Guidolin and Terry Reardon tallied, the Habs responded with goals by Elmer Lach and Glen Harmon, it was 2-2 at the end of the second. Third period goals by Ken Mosdell and Dutch Hiller and stout goaltending by the Habs Bill Durnan led Montreal to a 4-3 win and a 3-0 stranglehold on the series.

Game 4 in Boston saw Dit Clapper take to the ice for the first time in the series while Art Ross manned the bench. After a scoreless first period in which the Bruins were badly outshot (it took 18 minutes to record their first shot on net), the Bruins Murray Henderson broke the ice in the second, responded to by Richard. In the third, Don Gallinger put the Bruins up at 3:01 but Richard responded again a minute later, sending the game into overtime. Terry Reardon's 4th of the playoffs at 15:13 won it for the Bruins, despite being outshot 39-20. The teams travelled back to Montreal with the Habs having a 3-1 series lead.

Game 5 in Montreal saw the Kraut Line finally break out. After Bill Cowley opened the scoring at 5:42 on the power play, the Habs Fillion tied it up at 9:55. Durnan couldn't control a Woody Dumart shot and Bobby Bauer backhanded the rebound through Durnan's legs for a 2-1 lead. However, Lach and Mosdell responded and the Habs led 3-2 at the end of the first. The first goal of the series for Milt Schmidt was the only goal of the second period. Tied 3-3 going into the third, the Habs again demonstrated a strong final frame and once Toe Blake scored the winner, his first of the series, at 11:06 (playing with an injured back), Chamberlain and Hiller piled on and Montreal took the Cup in 5 games.

† Left off cup, but included on the team picture. 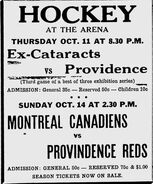 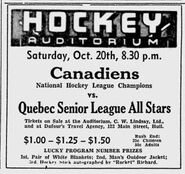