The 1944 Stanley Cup Final was a best-of-seven series between the Chicago Black Hawks and the Montreal Canadiens. The Canadiens won the series 4–0 to win their first Stanley Cup since 1931.

Maurice "Rocket" Richard made his Stanley Cup debut with a five goal performance in the series, including a hat-trick in game two. The Punch Line of Richard, Elmer Lach and Toe Blake scored 10 of the Canadiens 16 goals. Blake scored the Cup winner in overtime. In the same overtime, Bill Durnan stopped the first penalty shot awarded in the finals, awarded to Virgil Johnson. 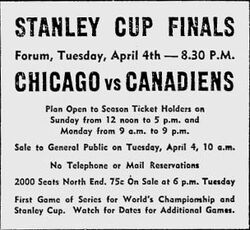 The Canadiens are awarded the Cup.