The North Division All-Stars shocked the undefeated University of Minnesota, etching out a 4 to 3 victory at the Amphitheatre on Friday, February 9th. The Golden Gophers did not fair any better Saturday as All-Stars took game two 9 to 6. In game 1 the All-Stars came back from a 3-0 deficient and in game 2 were trailing 5 to 3 late in the third. 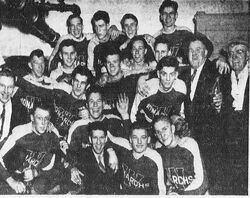 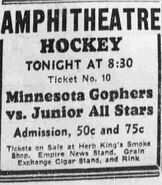 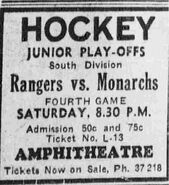 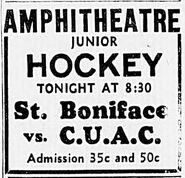 North Division
Add a photo to this gallery
Retrieved from "https://icehockey.fandom.com/wiki/1944-45_MJHL_Season?oldid=446494"
Community content is available under CC-BY-SA unless otherwise noted.