Originally these teams were to play 20 games each and then the league winner would advance to the Allan Cup playoffs. However the RCAF (Royal Canadian Air Force) banned play between its teams and civilian and other military teams. This ban went into effect on Jan. 6,1944.

The league ended then and disbanded. The Army had followed the RCAF's lead. The Navy, while having looser restrictions, would not allow play for the Allan Cup.

Manitoba had no entry into the Allan Cup playoffs. 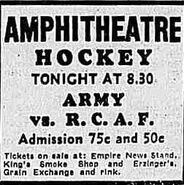 Retrieved from "https://icehockey.fandom.com/wiki/1943-44_Winnipeg_Senior_Services_Hockey_League_Season?oldid=420942"
Community content is available under CC-BY-SA unless otherwise noted.