This was the final series for the 1944 United States National Senior Hockey Championships. It was played between the Boston Olympics who were the champions of the Eastern Hockey League and the Hollywood Wolves who had won the Southern California Hockey League.

The entire series was played at Los Angeles, California in the Pan Pacific Auditorium.

All games were at Los Angeles 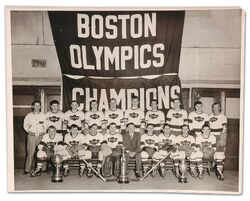 Boston Olympics
Add a photo to this gallery
Retrieved from "https://icehockey.fandom.com/wiki/1943-44_United_States_National_Senior_Championship?oldid=402470"
Community content is available under CC-BY-SA unless otherwise noted.