This is the 1943-44 season of the Quebec Senior Hockey League:

Note: Montreal Army withdrew before playing a game. They had personnel problems because of transfers. The schedule was restarted after their withdrawl.

Note: Cornwall Army Flyers withdrew in November also because of personnel problems. Their record was erased and the schedule restarted a second time.

Note: Lachine RCAF Alouettes had to withdraw in December because the RCAF ordered all of its teams and personnel to pull out of civilian leagues. This was the final standings with Lachine.

The league then restarted for the third time with a team from the University of Montreal. The Valleyfield Braves of the Provincial Senior League also applied but demanded too much money from the other teams. Quebec G.T. Davie did not submit enough information in its application.

Games between the Montreal Royals and the University of Montreal were worth four points.

Quebec Aces beat University of Montreal 2 games to none.

There were no other senior teams in the province so the Quebec Aces advanced to the 1943-44 Eastern Canada Allan Cup Playoffs. 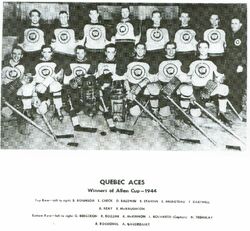 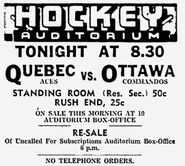 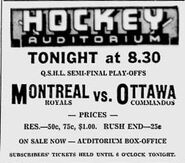 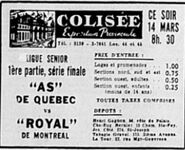 Retrieved from "https://icehockey.fandom.com/wiki/1943-44_QSHL?oldid=609000"
Community content is available under CC-BY-SA unless otherwise noted.