This is the 1943-44 Pacific Coast Senior Hockey Association season.

The Pacific Coast Senior Hockey Association was an amalgamation of the Vancouver Island Senior League and the Lower Mainland Senior League. Like all Canadian senior leagues this season, it suffered from the new military policy of not playing its teams against civilian teams.

From six teams the league was reduced to two.

The league only ran this one season.

The Military Depot team was forced by expensive transport costs (the ferry from Victoria to Vancouver) to withdraw on Jan. 22. The Navy team, without another team on Vancouver Island, had to follow suit on Jan. 30.

This was the only senior league in the province. 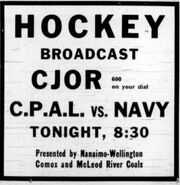 Victoria Radio Ad
Add a photo to this gallery
Retrieved from "https://icehockey.fandom.com/wiki/1943-44_Pacific_Coast_Senior_Hockey_Association_season?oldid=604270"
Community content is available under CC-BY-SA unless otherwise noted.