This is the 1943-44 season of the Ontario Hockey Association's Senior series:

At the beginning of the season the Toronto Army Daggers were forced to withdraw. Army regulations forbade hockey from interfering with operations. Kingston had a training centre so it could be argued that the games were part of training. Toronto had no training centre.

Pressure had been building on the military to change its policies. For the past two seasons, military teams had dominated Canadian senior hockey and, incidentally, Canadian football. The military was accused of keeping athletes at home and out of the fighting. In January, the Army and the Air Force changed their policies and forbade their teams from competing with civilian teams. Toronto RCAF Flyers and Kingston Army Frontenacs were forced to withdraw from the OHA Senior.

The Navy permitted its teams to play in civilian leagues but not to participate in the Allan Cup playoffs. Although HMCS York continued on, it could not have advanced had it won the league.

St Catharines and Hamilton were both civilian teams and therefore not affected by all this.

In the above standings, Kingston Army Frontenacs and Toronto RCAF Flyers had just withdrawn. The other three teams were credited with wins for unplayed games with these two teams. These losses, however, were not charged to the two military teams.

These standings reflect the record of Kingston Army Frontenacs and Toronto RCAF Flyers as explained above plus the unplayed wins awarded to St Catharines, Hamilton, and Toronto HMCS York. 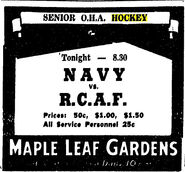 Retrieved from "https://icehockey.fandom.com/wiki/1943-44_OHA_Senior_Season?oldid=454495"
Community content is available under CC-BY-SA unless otherwise noted.