The 1943-44 NHL season was the 27th season of the National Hockey League. Six teams played 50 games each.

In memory of Frank Calder, the former NHL President who died in 1943, the league's Board of Governors donated the Calder Memorial Trophy to be awarded to the NHL's top rookie.

Bill Cowley had a huge lead in the scoring race and was scoring at a 2 points a game clip heading into Christmas. The press began to talk of a 100 point season until his shoulder was separated on a hit by Jack McLean of the Toronto Maple Leafs on January 8, 1944. He missed 11 games, returned briefly, then missed 3 more to a knee injury. He picked up his torrid scoring pace for the remainder of the season but limited to 36 (of 50) games, he finished 7th in league scoring with 71 points. His 1.97 points per game was an NHL record until broken by Wayne Gretzky in 1980-81.

The Art Ross Trophy was taken by teammate Herb Cain whose 82 points was, at the time, a league record. Art Jackson also finished in the top 10 of league scoring with 69 points. The loss of Frank Brimsek to war service saw the Bruins acquire Bert Gardiner to tend the net. Gardiner would struggle mightily and have the worst goal against average of any starting goalie in Bruins history, 5.17. He retired from pro hockey after the season ended. Gardiner did record an assist on February 29, 1944 versus the Toronto Maple Leafs.

The Montreal Canadiens had turned the corner and now Tommy Gorman and Dick Irvin had a team to make the fans happy. Bill Durnan solved the goaltending woes, but not before Gorman had all kinds of problems signing him. Durnan knew his worth, and wanted a handsome sum. Just before the first game, Gorman agreed to his contract demands. He was worth every penny, as he ran away with the Vezina Trophy and the Canadiens lost only five games all year, finishing first by a wide margin. The new and more familiar "Punch Line" of Elmer Lach, Toe Blake, and Maurice Richard dominated the offence and Richard had 32 goals. He replaced Joe Benoit, who did his duty to his country by joining the armed forces. Richard, in fact, was dubbed by teammate Ray Getliffe the nickname that would be his legend "The Rocket".

When Paul Bibeault came back from the Army, he found his job lost to the best goaltender in the NHL, Bill Durnan. Montreal agreed to loan him to Toronto, where he played very well, leading the Leafs to third place and leading the NHL with five shutouts. Gus Bodnar, a crack centre, was the top rookie, and for the first time, a team produced Calder Trophy winners in consecutive years. In fact, Bodnar scored the fastest goal by a rookie in his very first game. It took him only 15 seconds to score on Ken McAuley, Ranger goaltender, in a 5-2 win over the war-weakened Rangers.

The Rangers had plunged to last place the previous year and Lester Patrick was so discouraged that he wanted to suspend operations for the year. This year the Rangers lost Clint Smith, Lynn Patrick, Phil Watson and Alf Pike. The most unbelievably inept team iced for the Rangers this year. Things were so desperate that coach Frank Boucher had to come out of retirement to play some. But the Rangers set a modern day record of 6.20 goals against, giving up 310 goals in 50 games. One night when Lester Patrick went behind the bench to coach the team with Frank Boucher attending his brother's funeral, the Rangers were demolished 15-0 by Detroit as the Red Wings set a modern day record of most goals by a team in a single game. It was a horrifying experience for Patrick. Only a week later Syd Howe set a modern day record of 6 goals in a game in a 12-2 conquest of the hapless Rangers. The Rangers won only 6 games all year and finished a distant last, 23 points behind fifth-place Boston.

Chicago started with sub-par goaltending, but then president and general manager Bill Tobin decided to bring back Mike Karakas, who had been demoted to the minors in 1939-40 for his lackluster play. Karakas was just what the Black Hawks needed, as he played well and recorded three shutouts and got the team into the playoffs.

For the start of this season, the NHL added the centre red line, which meant players could no longer make two-line passes out of their own end. This was done to try to add more offence to the game as scoring was down and fans were turning away. Oddly enough, 62 years later, the red line was removed for the exact same reasons it was added. Both times critics said, "You are going to kill the game."

The following is a list of players of note who played their first NHL game in 1943-44 (listed with their first team, asterisk(*) marks debut in playoffs):

The following is a list of players of note that played their last game in the NHL in 1943-44 (listed with their last team): 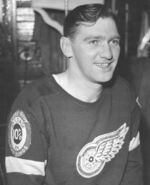 NHL Board of Governors