The Calgary RCAF Mustangs (Air Force) dropped out before the season started, because they did not have enough players to ice a complete team. HMCS Tecumseh (Navy) tried to form a combined team with the Air Force after it lost its first four games. The other teams agreed and the combined team was formed, winning its next four games.

Meanwhile the military high commands banned play by its teams for the Allan Cup, forcing this league to drop out of the Alberta Amateur Hockey Association.

Play was also banned between teams from different services. The Army and Navy allowed an exception for this league. The Air Force adopted a different policy. Starting on January 15, they allowed their players to play only once every two weeks. The combined team was forced to play all other games with Navy players only.

The records of the teams:

All playoff games were with Navy players only.

Note: In December and January military policy was changed to disallow military teams from competing with civilian teams. This left the Services League out of the Allan Cup playoffs.

To fill the void and represent the province the Edmonton Vics were formed. 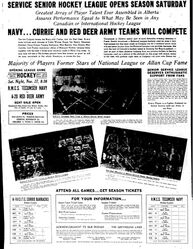 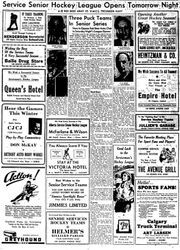 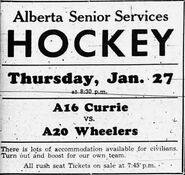