The 1943–44 Toronto Maple Leafs season was Toronto's 27th season in the NHL. The Maple Leafs finished 3rd in the league and lost in the Semi-finals to the Montreal Canadiens 4 games to 1. 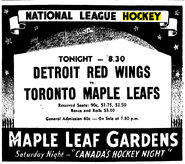 Radio Ad
Add a photo to this gallery

Retrieved from "https://icehockey.fandom.com/wiki/1943–44_Toronto_Maple_Leafs_season?oldid=722028"
Community content is available under CC-BY-SA unless otherwise noted.