The 1943–44 Montreal Canadiens season was the club's 35th season. The Canadiens finished 1st in the league and defeated the Chicago Black Hawks in the 1944 Stanley Cup Finals 4 games to 1 to win the fifth Stanley Cup in club history.

At the Habs' training camp in 1943, Canadiens manager Tommy Gorman settled on Bill Durnan as his goalie. Durnan stated that he was happy as an amateur and happy with less money if it meant avoiding the stress of the professional game. On opening night, Durnan was not yet signed. Ten minutes before the first faceoff, he spoke with Gorman and reached a deal. Durnan signed the contract and played in the game. The result was a 2-2 draw with the Boston Bruins. The rookie netminder was a few months shy of his 27th birthday. [1]

Bill Durnan would join the club as its new goaltender and he won the Vezina Trophy in his rookie season. [2]

In the previous 12 seasons (since they had last won the Stanley Cup in 1930-31), the Canadiens had not won a single playoff series.

Starting with this season, the Canadiens started an amazing era for the team. In 36 seasons, they won 18 Cups and made it to another 6 Finals up until the 1978–79 Montreal Canadiens season.

Some of Durnan's teammates included the Punch Line of Elmer Lach, Maurice Richard and Toe Blake. Durnan was a key element that took Montreal back to the Stanley Cup after 13 years of frustration. Durnan led the league in games played, wins and goals-against average in the regular season. [1]

On Dec. 20, 1943, coach Dick Irvin went home to Regina to spend some time with his family. While he was gone team captain Toe Blake replaced him. Ironically, Blake would replace Irvin permanently as coach 12 years later.

In the Stanley Cup playoffs, Durnan allowed only 1.53 goals per game as the Canadiens skated to the title. At season’s end, Durnan was awarded the Vezina Trophy, the first rookie to win the award, and was selected to the league's First All-Star Team. [1]

Rocket Richard scored seven goals in the series, including all five for Montreal in game two. After giving up the first game at home to Toronto, Montreal took over, winning the next four, finishing the series with a 11–0 shellacking in game five.

Main article: 1944 Stanley Cup Finals
Maurice 'Rocket' Richard made his Stanley Cup debut with a five goal performance in the series, including a hat-trick in Game two. The Punch Line of Richard, Elmer Lach and Toe Blake scored 10 of the Canadiens 16 goals. Blake scored the Cup winner in overtime. In the same overtime, Bill Durnan stopped the first penalty shot awarded in the finals, awarded to Virgil Johnson.

The Canadiens are awarded the Cup. 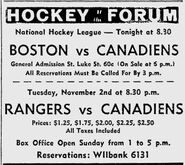 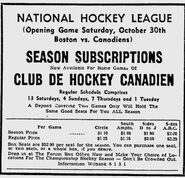