The 1943–44 Detroit Red Wings season was the Red Wings' 18th season. The Red Wings finished 2nd in the league and lost in the Semi-finals to the Chicago Black Hawks 4 games to 1.

The Wings wore patches on their jerseys encouraging the public to buy War Bonds.

The Wings won no trophies nor had any All-Stars this season. 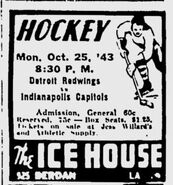 Pre-season @ Toledo
Add a photo to this gallery

Retrieved from "https://icehockey.fandom.com/wiki/1943%E2%80%9344_Detroit_Red_Wings_season?oldid=690295"
Community content is available under CC-BY-SA unless otherwise noted.